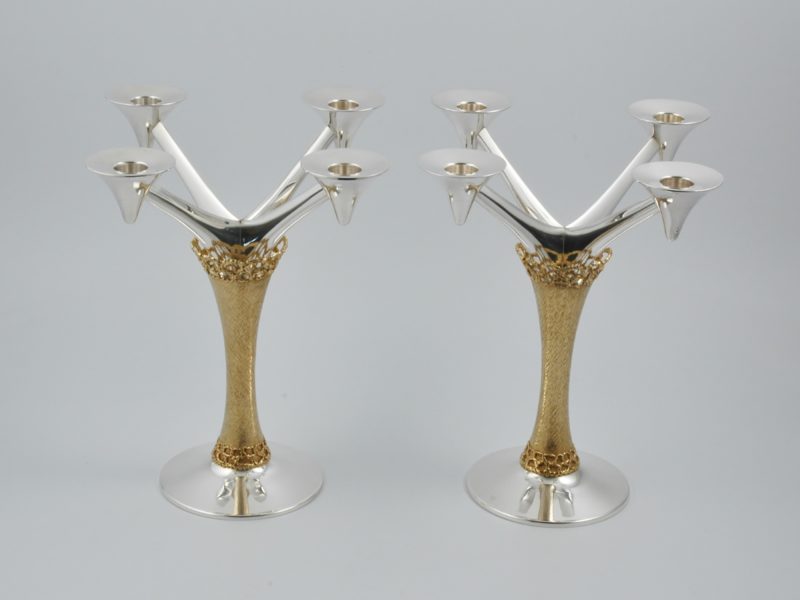 Stuart Devlin (9 October1931-12 April 2018), an Australian by birth became one of the most well-known and respected English silversmiths of the late 20th century. Born in Geelong Australia his first major commission was to design the new Australian decimal coinage in 1963. While supervising the production of this design in London he and his wife Kim decided to move and settle in England. He opened his workshop at Clerkenwell in 1965 and began a career in the design and production of gold and silver. He was made a Freeman of the Worshipful Company of Goldsmiths in 1966 and in 1972 they elected him a Liveryman. He was Prime Warden of the Goldsmiths Company from 1996-97.
His pioneering techniques led to a large variety of textures and filigree forms that stand apart in the lexicon of silver design. The process of silver that has been gold plated is known as gilding and where used to highlight certain areas is known as parcel gilt. It is this speciality that can be appreciated in this suite of candelabra. Along with the designing and production of special commissions Stuart Devlin produced an annual collection. In 1975 the collection included a candelabra, wine goblets, sauce bowl, condiment set, place name holder and cutlery. It was produced in a limited edition of 100 and was available either as a set or sold individually. This set of candelabra with gilded filigree that crowns the main column was a trademark of his unique look.