THE ANTIQUARIAN | The highlight of the British Museum’s African Galleries is ‘Throne of Weapons’ by Mozambican artist Cristóvão Canhavato. 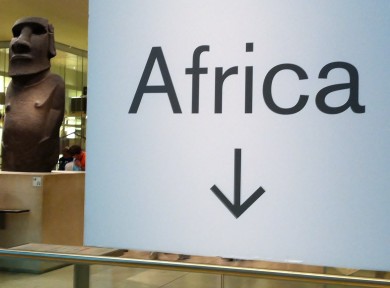 Ok so you saw the photo and thought Africa was going down the tubes again. Not so, in fact we have finally found the cure to the instruments of death traded in by the various lords of war and warlords in Africa. But first let me put this into perspective. On the hottest recorded day this summer, London was warming to 32 degrees and I was on my way to visit the British Museum. According to the sign outside the Russell Square tube station it is only 885 yards down the road and proved easy to find. As it says in The British Museum Little book of Treasures it “is one of the world’s greatest treasure houses and at the same time one of its most respected academic institutions”

The reason for my visit was to research a piece that had come into stock and for the world’s art and antique dealer’s, museums such as this are the place to go. On my way in I spotted this sign showing the location of The Sainsbury African Galleries, which with great air conditioning was a blessing. Here one finds not only historical objects but contemporary works as well. The highlight for me turned out to be the ‘Throne of Weapons’ by Cristóvão Canhavato who produced this in Maputo, Mozambique in 2001. Made from scrapped weapons such as the notorious AK 47 these instruments of death have been reborn as art and make a very powerful statement. Driven by Bishop Dinis Sengulane who initiated a project called ‘Arms into Tools’ in 1995, the primary aim was to encourage the local populace to swap their guns for tools. Artists were then given access to turn these into works of art. Of these the throne is truly engaging, focusing the mind on how crude armaments have been reformed into a traditional symbol of power.

The only thing the international art trade has to do now is to convince the world that these contemporary art works will surge in value and maybe we can then sell them back to the countries that made them in the first place. It is indeed a strange world we live in and seeing the impact this had on all the visiting tourists I am sure this is exactly what will happen. Who knows but maybe we could give the arms trade a ‘gun’ for their money.

See Antiques from Africa # 9 for more on the British Museum 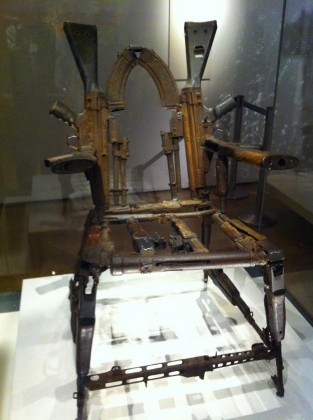