What strikes me when visiting London is the reaction to the various museums. On standing and taking this photo I was impressed by how many visitors the British Museum gets every day. What is really more interesting is how many […] 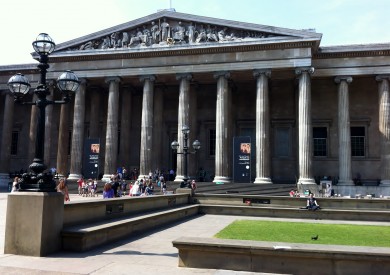 What strikes me when visiting London is the reaction to the various museums. On standing and taking this photo I was impressed by how many visitors the British Museum gets every day. What is really more interesting is how many young people there are in this mix, from all four corners of the globe. Once you step inside the reasons for its popularity are easy to see.  Housed in this impressive Greek Revival building designed by Sir Robert Smirke is a collection of about 8 million works. It was established in 1753 and was founded on the collections of Sir Hans Sloane.

Over 260 years the collections have grown and today it houses what I would term some of the seven wonders of the ‘antique’ world. Among these is the Rosetta Stone from Egypt which is a stone tablet upon which a decree is carved in three scripts, dating from 196 BC. The same message in three languages has allowed scholars to decipher and understand Egyptian hieroglyphs. Another wonder are the Elgin Marbles. These are not the type played with by children but are a collection of classical Greek marble sculptures that were originally part of the Parthenon in Athens. Removed by Thomas Bruce the 7th Earl of Elgin between 1801 and 1812 and sent by boat to Britain, they were acquired by the British government in 1816 and put on display.

The other highlights include the Portland Vase, the Mildenhall Great Dish and the Sutton Hoo Helmet. It is this piece which on the day I visited was the showstopper as its fierce demeanor and accompanying story of Anglo-Saxon burial traditions enthralled one and all. Dating from the 7th century AD it was discovered in 1939 as part of a ship-burial. It has been postulated that it belonged to Redwald, the king and overlord of the Anglo-Saxon kingdoms. Coming face to face with the who’s who of Sutton Hoo certainly left a deep impression.

Situated about three blocks from the Russell Square tube station entrance is free and you would need at least three hours to do this impressive museum justice.

See Antiques From Africa # 10 for more on the British Museum 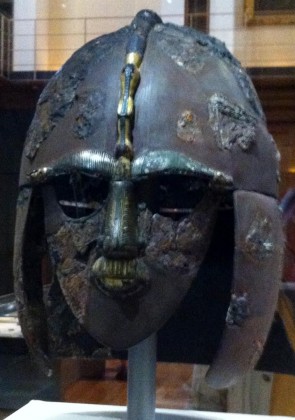