THE ANTIQUARIAN | This summer the ‘must see’ of the art world has to be the LS Lowry exhibition at Tate Britain. 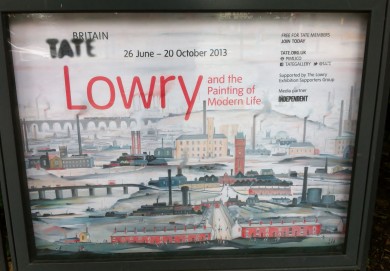 The absolute joy in visiting London is being able to access some of the best museums in the world. This summer the ‘must see’ of the art world has to be the LS Lowry exhibition at Tate Britain. Running until 20 October 2013, this major retrospective has an entrance fee of £16 which has to be the best spent money of my trip.

For anybody outside of the art scene the name Lowry may not mean much but when you step into this carefully choreographed exhibition the genius of the artist is hard to ignore. You are taken back in time to the harsh economic reality of 1930’s industrial Britain. The urban scenes with his “matchstick men” as his human figures present a unique view on the impact of modernisation and industrial growth. This art shows the impact of how the factory wastelands were shaping Britain and how the outlook had darkened for the worker in terms of them being just a small cog in a very large industrial process. 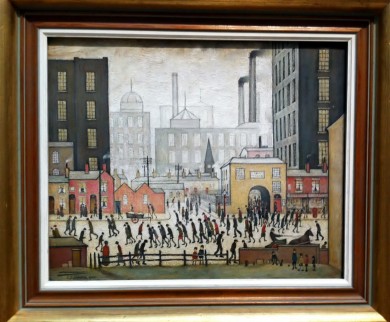 Coming from the Mill by LS Lowry 1930

The exhibition housed on the first floor covers three main rooms and is accompanied by very good background explaining some of the insights Lowry had, when working. One of them is how people in his art, which by his own admittance “were strange creations”, fit into his urban landscapes. You have to stand in front of these works to feel the full impact and judging by how many people really took their time when looking, underlies his talent as one of Britain’s top artists.

The Tate Britain was founded by Sir Henry Tate in 1897 and is located on the bank of the Thames River in Millbank. Apart from the current Lowry exhibition for which there is an entrance charge the admittance to the rest of the gallery is free. There is a lot of other very good work on view including Jacob Epstein’s large alabaster statue of Jacob and the Angel and the Francis Bacon Triptych done in 1972.

There is a riverboat service that links this museum to the other Tate (that being the Tate Modern) and the pick-up point is right outside on the river’s edge. This is called the Millbank Millennium Pier and on your journey to the Tate Modern you pass Cleopatra’s Needle and the Palace of Westminster containing Big Ben. Two great museums just a boat ride apart on the Thames makes for a very good cultural adventure.