According to family tradition it was discovered in a crate washed up on a beach at Port Beaufort sometime in the 1840’s. Sourced from the family who needed the money for the children’s university education it stole the show at the latest Strauss & Co. auction sale held in Cape Town on Monday the 21st of October.

According to family tradition this cabinet-on stand was discovered after a ship wreck in the 1840’s. Stored in a crate it washed up on a beach at Port Beaufort where the Breede River flows into the sea in the Western Cape. In the same family for the next 170 years the owner reluctantly consigned it to auction as he needed the money for the children’s university education. With both local and international interest it stole the show at the latest Strauss & Co. auction sale held in Cape Town on Monday the 21st of October. 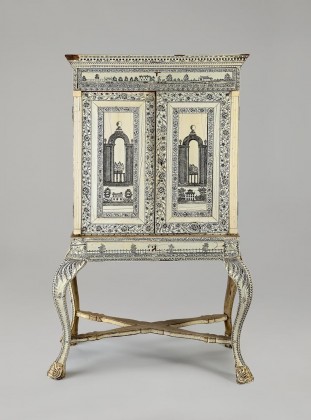 This magnificent example of an Anglo-Indian cabinet-on-stand was made in Vizagapatam and dates from the last quarter of the 18th century. Vizagapatam is on the coast of India between Calcutta and Madras and the British East India Company opened a trading station there in 1668. Due to the natural harbour and easy access to the hinterland it prospered and the trademark furniture using indigenous timbers and ivory inlay developed into an art form. This example shows typical engraving which is highlighted with lac giving the black background. There is speculation as to how it ended up on the beach in South Africa and the most likely explanation is that it was part of the inventory of some returning European who had been in India. 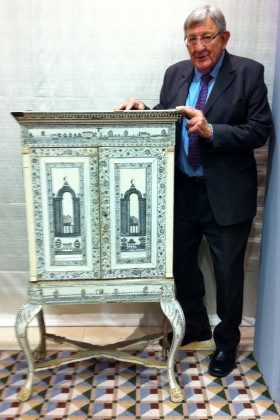 Pictured here is Stephan Welz the MD of Strauss & Co. and he rightly asserts how difficult it was to estimate this. They opted for a conservative ‘come buy me’ estimate of 150-200 thousand rand, due to some ‘as found’ condition issues. When the lot came up, with interest from around the world, every phone at the auction desk was booked. Bidding quickly outstripped the estimate and soared. At 1 million there were still three phones in contention and the final hammer price was 1, 8 million. With the auctioneers commission it took the final price to just over 2 million rand which at today’s rate equates to 129 000 pounds. This set a new South African record for any piece of furniture sold at auction and illustrates how some family heirlooms have international value that can be realised anywhere in the world. This is an important thing to keep in mind when living in Africa.