Fake‘n Forgery !! They are part of our industry, pieces made to deceive and con you out of your money.

They are part of our industry, pieces made to deceive and con you out of your money. When you first see it and it looks the part you lay down your hard earned cash and sit back and congratulate yourself on what a smart buy it was. Then you either see another identical or another specialist dealer in the business shows it for what it really is, a Fake‘n Forgery !!

Being an antique dealer means that while a lot of the time we get to discover and find unique pieces that are exceptional, the downside is that when a faker is active we will inevitably get caught. We are at the frontline – paying school fees in the life of hard knocks when it comes to fakes. Most antique dealers will have been caught sometime in their careers. The reason behind this is simple, we earn a living out of buying and selling and when something catches our eye that holds the possibility of a profit we will buy first and ask question later. 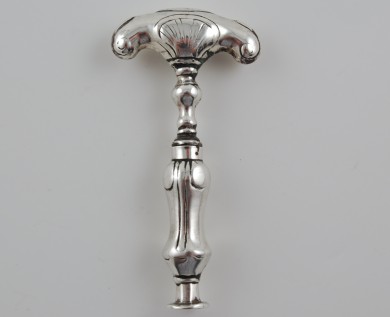 When at an antique fair recently I was looking at some pieces from another dealer and one of the pieces I bought was a silver corkscrew. In the shape of an early 19th century Dutch silver corkscrew it was unmarked which is common on period pieces. It had not been cast but rather made in sheet metal, the correct method for the time. Casting is an easy way to replicate a corkscrew but is very easy to identify. The only thing was that it was over polished but at the price I did not hesitate and snapped it up. On returning home it went into the box waiting for cataloguing before going into stock. A few weeks later I was reading a very good blog written by an astute and knowledgeable dealer in the UK, Peter Borrett. His blog Corkscrews Online- Latest Corkscrew News at www.corkscrewsonline.com  is a valuable resource from which I have learnt a lot. On the l3th of February posting he focused on a fake silver corkscrew in the 18th century style that had surfaced on eBay. There it was, exactly the same as the one I had grabbed in haste. What makes this corkscrew a fake is that the worm is normal twisted wire and not tempered, which makes it to soft to remove a cork. In my haste I did not check it properly.

Hook, line and sinker I had been caught by something newly made and then offered at a price to good to ignore. As Mr Borrett astutely points out what do you do now – do you pass it on to someone else in the hope of getting your money back? When you do the cycle repeats itself and that is bad for business as when a collector gets caught his kneejerk instinct is to stop collecting completely. Having been down this road before and now challenged by his question “How good is your moral compass?” on the blog my solution is simple. 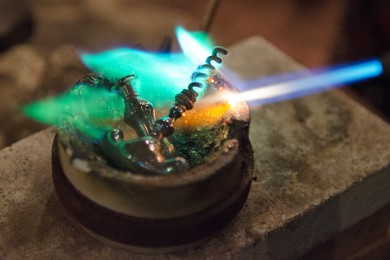