Tea grown in the Far East notably China has been imported into England since the 1600’s. In those early days when the tea chests arrived one can imagine the delight for those, who upon opening them would have discovered a scallop shape sea shell within.

Tea grown in the Far East notably China has been imported into England since the 1600’s. In those early days when the tea chests arrived one can imagine the delight for those, who upon opening them would have discovered a scallop shape sea shell within. The idea behind this was that the shell was to be used as a scoop to move the tea into tea caddies for use at the table. Such shells to those who had not traveled would have been wondrous curiosities. This was to provide the inspiration of shell shaped spoons that would have been used at the table to measure out the tea into the tea pot. 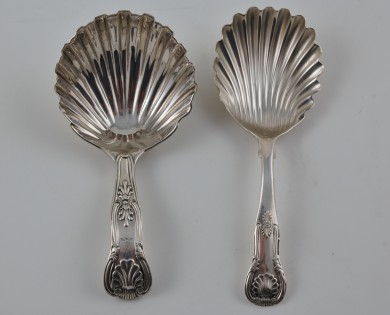 The name of these spoons is derived from the box itself which was in turn “derived from the Malaysian “kati’ which was a measure of roughly 1 ⅓ pounds” according to John Norrie in his book ‘Caddy Spoons An Illustrated Guide’. The silversmiths of the late 18th century used this shape for inspiration and so the ‘caddy shells’ in turn became caddy spoons. The examples pictured have been crafted to give the impression of a shell. Initially light, the idea was that the caddy spoon would reside within the tea caddy and would float on top of the tea to be easily accessible when needed. During the 19th century jockey caps, hands, acorns and fish all provided inspiration to the silversmith and the resulting novelty shape caddy spoons would have been talking points at the tea table. What is interesting to see is the amount of design that has gone into this seemingly simple spoon. At the beginning of the 20th century Liberty & Co, the Regent Street department store was to pioneer the English Art Nouveau style and chief amongst its designers was Archibald Knox who is the designer of this silver and enamel caddy spoon dating from 1903. The enamel highlights the design and has a smooth durable surface that contrasts well with the silver. As the twentieth century progressed we saw the rise of the designer Arts & Crafts silversmiths who were often commissioned to make caddy spoons. The last spoon pictured was made and hallmarked in London in 1931. It is by Omar Ramsden and is mounted with four lozenge shaped chrysoprase. His design for this humble serving spoon has elevated it into a miniature art form and today this magnificent ‘jewel’ is the epitome of exceptional 20th century design.