For anyone with a sweet tooth the addition of sugar to our morning tea or coffee is a great way to start the day.

As the 17th century progressed cane sugar from the West Indies was shipped to England and this was sent out in the form of sugar cones. On arrival in the English household small pieces were cut off and these lumps were placed into the sugar bowl. The rest of the cone went back under lock and key due to its high cost. When the time came to add the sugar to the tea a pair of tea tongs were used to gently place it into the tea cup. 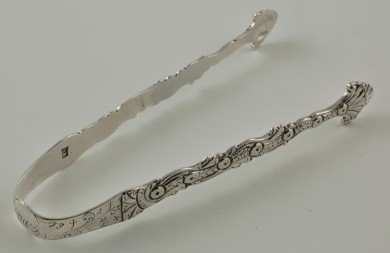 The form of these tongs had their initial origins in the fire tongs, known as andiron tongs used for putting wood and coal onto the fire. As the century progressed various other forms were developed including the sprung bow type made out of a single piece of silver. Here the silversmith would hammer out the silver and as it was formed the silver would work harden leaving a spring effect when squeezed together. 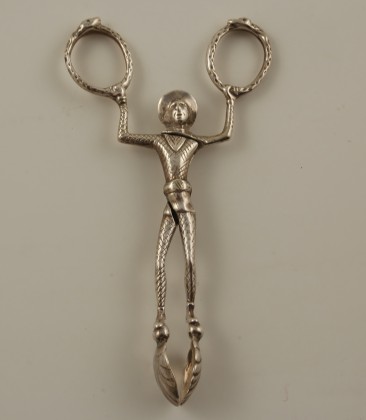 By the late 1880s the Victorians had developed a love for novelty shapes and the silversmiths rose to the challenge producing amongst others the harlequin pair that was made and hallmarked in Birmingham 1892. Cast in two pieces and of scissor form they would have been a talking point in the parlour at tea time.

The last pair pictured is the ‘Dutch’ doll version that has an enamelled head. Modeled on wodden childrens toys this example dates from London 1909 and has ‘Patent applied for’ stamped onto one leg. 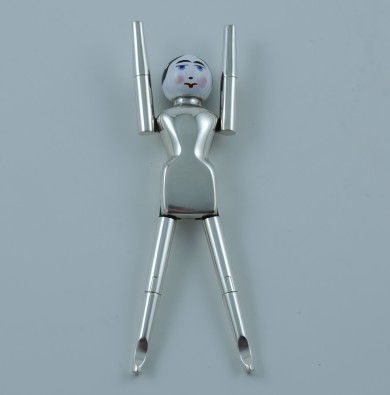 The design of this tong is ingenious and when you squeeze the arms together it causes the legs to close thus grasping the sugar lump ready to be transferred to the cup. This was obviously a very successful design and remained in production until the mid-1920’s. Great design coupled with the novelty factor is what drives this collecting market and this is the sweetest of them all.