As gold miners in South Africa went on strike from Tuesday evening the focus is once again on this sector that has produced so much of South Africa’s wealth. 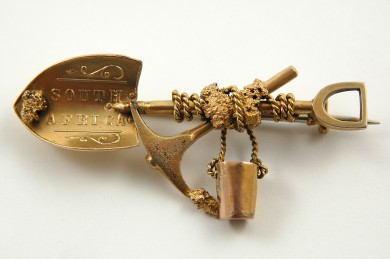 As gold miners in South Africa went on strike from Tuesday evening the focus is once again on this sector that has produced so much of South Africa’s wealth. When alluvial gold was discovered in the rivers around Pilgrims Rest and Barberton in the eighteen hundreds it was to change the course of history. Much of this gold panned from the rivers made its way back to Europe and in England the goldsmiths were quick to cash in on this popularity of easy riches. This brooch pictured was produced by Sampson Mordan & Co and is applied with alluvial gold nuggets. Stamped SOUTH AFRICA on the spade it dates from the 1890’s and would have commemorated the Witwatersrand Gold Rush after the discovery of the goldfields at Gerhardus Oosthuizen’s farm at Langlaagte in 1886.

When news began to spread around the world of this discovery and the easy pickings of gold you can imagine the interest it would have created. With a pick, spade and bucket to mine the gold along with a rope to mark off your claim you were set to make your fortune. All of these items are depicted on this brooch and this message would have been greedily studied and acted upon.

As the gold rush continued to develop the politics of the day were influenced and the interests of the Zuid- Afrikaansche Repubiek (ZAR) and the British Empire clashed. The result of these heightened political tensions would ultimately lead to the Boer War in 1899. Interestingly the next picture shows a gold propelling pencil in the shape of a musket also dating from the 1880’s. Sampson Mordan & Co are better known as inventors of the propelling pencil as in 1822 Sampson Mordan was granted the first English patent for a mechanical pencil. This novelty pencil is made in 15 carat gold and one wonders if it was made out of the first gold mined on the Witwatersrand.

These two pieces are indicative of the history and struggle that has shaped our country and with the loss of around 761 kilos of gold produced each day as the strike continues, they serve as a reminder of the importance of this industry. Much of the gold mined and produced on the labour of Africa went into producing such novelties and while much of the gold mined today is destined for gold bullion, Krugerrands and jewellery these pieces of old gold serve to remind us how important our natural resources are.