One of our greatest exports from South Africa is the Krugerrand and since its launch in 1967 has gone on to become one of the most popular ways for anyone to own gold. 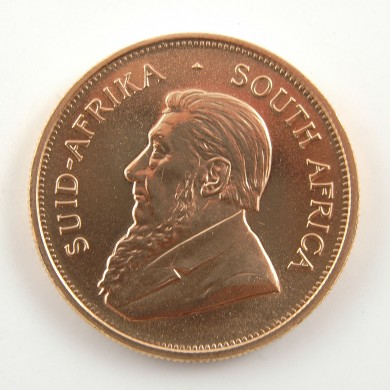 One of our greatest exports from South Africa is the Krugerrand and since its launch in 1967 has gone on to become one of the most popular ways for anyone to own gold. Named after Paul Kruger and our currency the Krugerrand was the first ounce-denominated gold coin according to Rand Refinery who produce and supply the coin blanks to the South African Treasury. To date some 60 million coins have been sold and at today’s current price they will cost you about R 14 200 or ₤ 910. What makes them unique is that each coin contains exactly 1 ounce or 31.1035 grams of fine gold. This means that the coin itself weighs in at slightly more as it is alloyed with copper to harden it. The amount of copper added amounts to 8.33 percent and the gold content is fixed at 91.67 percent which in fact makes the coin itself 22 carats. But the main selling point remains that the coin contains 1 ounce of fine gold. As gold is always quoted in ounces it makes it easy to work out its value in any required currency and being a coin which is legal tender worldwide, it is relatively easy to trade.

As an antique dealer many of the really good pieces I handle contain gold in various amounts. These can range upwards from 9 carat which can be marked as such, or as .375 using the millesimal fineness system where the gold purity is indicated with a decimal hallmark. This is nicely illustrated on this English stamp box hallmarked in Chester 1905 when sending mail required more than the press of a button. 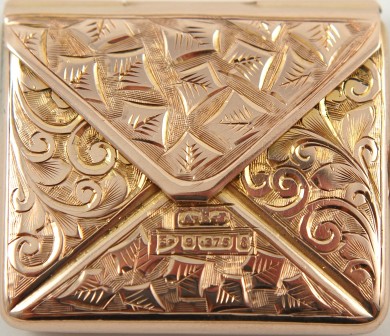 Gold boxes were the preserve of the very wealthy in the early 19th century and the marks shown here are from an English 18 carat gold vinaigrette. A vinaigrette was used for carrying aromatic perfume absorbed into a sponge that was stored within the box. Held to the nose when traversing the streets of Georgian London they helped keep the smell at bay. Carrying the London 18 carat gold marks along with the maker’s mark of PD possibly for Peter Desvignes, pieces such as this have a historical value of which the gold content is but a small part.

These two examples of antique English gold are part of a collection that will be out on show in Johannesburg next week at the South African Antique Dealers Association (SAADA) fair. What makes this fair special is that it marks 50 years since SAADA was formed in 1963 and golden anniversaries just like the metal are very special indeed.