This brass measure stamped for the Government of the Traansvaal is one of a set of three. What makes it so historically interesting is the fact that it would have been made in England at a time when the Zuid- Afrikaansche Repubiek (ZAR) was led by President Paul Kruger. 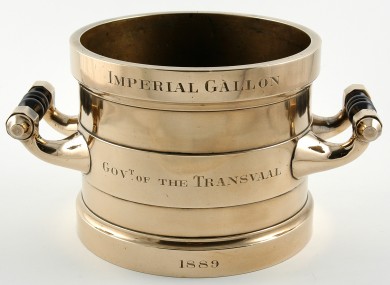 When gold was discovered on Gerhardus Oosthuizen’s farm at Langlaagte in 1886 the stage was set for the development of the Traansvaal as the Witwatersrand Gold Rush began. This brass measure stamped for the Government of the Traansvaal is one of a set of three. What makes it so historically interesting is the fact that it would have been made in England at a time when the Zuid- Afrikaansche Repubiek (ZAR) was led by President Paul Kruger. Needing to have a system of controlled weights and measures such as this would have been crucial for the regulation of fair trade. This set would have been used as the master set against which all other sets in private ownership would have been tested. Once found to conform, the measures being tested would have been struck with a proof mark on the rim. The set includes Imperial Gallon, Half Gallon & Quart and was sourced in England earlier this year. Bought back to South Africa it was displayed at the annual South African Antique Dealers’ Association (SAADA) fair in September and was acquired by a South African collector. 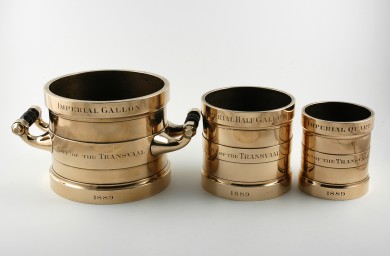 Interest in South African related antiques was one of the underlying trends seen at the fair and another area showing strong interest is the Boer War. Artifacts from the prisoner of war camps made to relieve boredom and earn pocket money are today eagerly sought after. These South African ‘Folk Art’ pieces range from carved bone watch chains through to letter openers and were fashioned out of any available materials. Soup bones once dried could be carved into links for the watch chain while wire from the fence could be appropriated for the links. Any local wood could be fashioned using a pocket knife into practical items such as letter openers, complete with details of the camp and dates of interment. Today these items serve as a reminder that many of these prisoners were shipped away from Africa to foreign internment. The logic would have been that once away from Africa, escape and a return to a guerrilla lifestyle would be impossible. One can only imagine the long hours of boredom and angst the prisoners encountered and these pieces each with its own particular story are all that remain.

Following on the theme on Tuesday the 8th of October, Stephan Welz & Co a leading local auctioneer will be hosting a talk by Robin Woodruff who is an ardent collector of Boer War memorabilia. The talk takes place at The Great Cellar, Alphen Estate, Constantia, Cape Town.