Last Sunday morning I was watching a series on the History Channel taped during the week called Porn Stars with my nine year old son. Sorry spell check doing its thing again- it is ‘Pawn Stars’, filmed in downtown Las Vegas and is about the Gold & Silver Pawn Shop owned and run by Rick Harrison, his son Corey and Richard Benjamin Harrison AKA the ‘Old man’. A great series where clients wanting to sell or pawn items are filmed having their pieces appraised by visiting experts, valued, haggled over and then sometimes bought by the shop. It looks like most reality TV on the surface but scratch deeper and the real value of this series comes to the fore.

Not only does this family and long time friend ‘Chumlee’ deliver history up in a way that is entertaining but it is well researched and factually accurate teaching even those such as myself who run an antique store a thing or two. I think what got my attention in the beginning was you look at the cast and think they run a pawn shop in Vegas how good can they be. The other thing is none of them looks like a traditional TV star. It is only when you follow the story that you realise never judge the book by its cover. 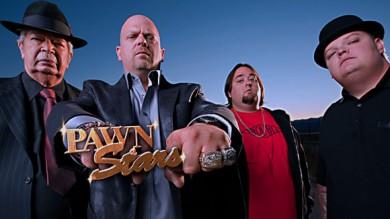 As a dealer with a shop on more modest lines there are always things that happen in our industry that remain inexpiable, interesting and strange. A good example of this is how certain pieces will wait for the right buyer. I cannot remember how many times I have had in stock a piece which experience tells me should sell right away as it is well priced and commercially viable. Yet it will, despite all of my sales pitch stubbornly wait for the person who is right for it. I remember having a really good piece of Georgian silver, a brandy warmer in stock. At an antique fair I sold it, only for the client to discover that the price had an extra zero which in my animated sales pitch had been overlooked. Back into the show cabinet it went. Five years later after having had a few similar examples through it finally did sell. It sold to that original client who had grown as a collector and was now buying on that level. At the beginning of October I put into stock three pieces that had been sourced all in the same month from different parts of South Africa. First up was an English oak marriage box with internal candle holder. Carved to the front were initials, a heart and the date 1807. 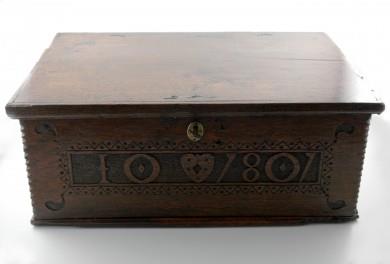 Next up was an English brass coat hook that came to me from another dealer up in Johannesburg. It was a folk art piece with hearts, flowers blooming indicative of growing love, the couple’s initials and the date 1807.

I then put into stock a silver bougie-box which was a type of candle holder of box form used when you lit the way to bed. It carried the hallmark for London 1807. Three pieces all from different sources, all in one week and all dated 1807. The great part for me as a dealer is that all three found a new home within the month with the client who bought the brandy warmer adding the bougie-box to his collection.