One of the most frequently asked questions in my antique shop is where does all of your knowledge come from ? A good question that makes us look more impressive than we really are. The short answer is research and when something comes into stock we will research it until we know everything there is to know about it. This information then goes onto the ticket and we always endeavour to get it right. Having said that sometimes, something pops up that leaves us flummoxed. 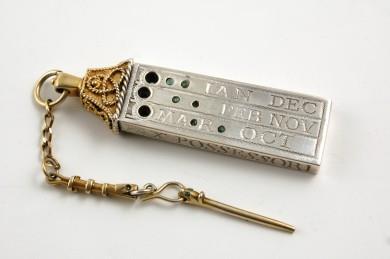 This silver block with attached chain is a good case in point. I first saw one in England about 5 years ago. I snapped it up as I had never seen another one and the piece itself intrigued me. After having looked closely at it and dating it which I could do easily from the silver hallmark I learnt it was made and hallmarked in London in 1975 and as such was not very old. There were months of the year on both sides and further Latin inscriptions on the sides. The ‘stick’ obviously went into the holes but the reason as to why eluded me. I left it on my bookcase as an on-going research project as I wanted to really know more about it before I placed it in stock. There it sat until in the post arrived a pamphlet announcing an exhibition in London on Church silver titled ‘Treasures of the English Church’. Inside the front cover was a picture of this piece with an explanation.

The very next day I was in my shop when in walked an English tourist who explained he was a long time collector of the strange and unusual. He then proceeded to show me pictures of some of the weird and wonderful things he had acquired over the years many of which were new to me. They included antique hair curling irons, bone saws, silver cow udder probes and a silver ‘Bezoar stone’ holder. When he got to the last picture he explained that so far this piece and its use had alluded him and all other antique dealers and collectors he had shown it to.

I took one look at the silver block with attached gnomon and said of course I know what it is- “It’s a silver copy of a tenth century pocket sun dial discovered at Canterbury cathedral.”

Knowledge in the antique game- Priceless !