THE ANTIQUARIAN | Billed as the world’s greatest museum of art and design, the V&A museum houses more than four and a half million objects. I visit this museum every time I am in London and am always impressed by the various specialist exhibitions that they put on.

Now that the London June Fairs season is past it is time to focus on what other cultural sights can be found when visiting the capital. The one that really springs to mind is the Victoria & Albert Museum, commonly known as the V&A. This is found a short walk from South Kensington Tube station and is well worth a visit. Billed as the world’s greatest museum of art and design it houses more than four and a half million objects. The thing that really strikes me upon entering is that there is no formal paid entrance fee. They rely on a donation instead from those who can afford it. For poor South Africans such as me this means I am not discriminated against just because I cannot afford the forty five rand suggested fee. Very gracious and also smart as they ensure that art and antiques are really accessible to all. Who knows, they may be letting in the next Van Gogh or Sekoto who will be so stimulated by what he or she has seen that they go out and change the world as we know it.

Broken up into various galleries one will find everything from treasures of Asia through to sculpture from antiquity. The building itself is set around an open outdoor garden and has various floors.  A map which can be found at the front door, again free but if you can a small donation is smart as it covers printing costs is essential. I always get lost here as the galleries lead into one another and the map is the only means in locating the things that you want to see. I visit this museum every time I am in London and am always impressed by the various specialist exhibitions that they put on.

At present, ending on 14 July, is a showing of ‘Treasures of The Royal Courts’. This smartly arranged exhibition highlights the majesty of the courts of Henry VIII through to the early Romanovs. It gives a picture as to the close relationship between the English Monarchy and the Russian tsars and shows some truly splendid royal treasures.

As to the time needed you must work on at least an hour although in reality three will be better. The exhibits are all well described and documented and for antique dealers such as me this forms an important source of information when researching stock. At present I have a silver claret jug by Elkington’s in stock that was made by electrotyping or more plainly growing it in a tank of liquid from a wax copy. An identical version done in silver plate can be found here in the silver galleries and I am proud to say that when you buy from my shop you are buying something that can be seen in the world’s top museum. 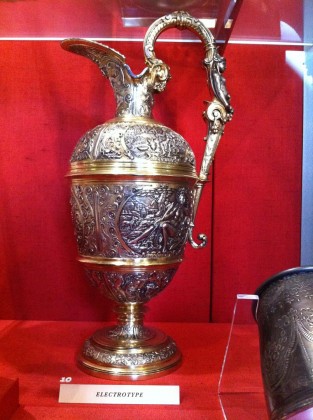 Elkington Claret jug courtesy of the V & A London